It is said that people make a first impression within 30 seconds. And a Diva always does her best to maximize those moments. You’ve been in enough new client meetings and career elevating interviews to know that how you present your image is included in these first-impression seconds. Lemme tell you, while I like to look good, I have no problem budgeting my Diva dollars to get the impact I want. And there’s no need to max your budget on creating your DivaLuxe style when you can achieve a finished High-End look with a High-Low approach.

Back when I worked in the television industry, I learned firsthand how important it was to have a new dress for every camera-on-the-scene occasion. You never knew if what you were wearing would end up being shown in a recap of the event, in print or on air. And it was simply an unspoken rule that you shouldn’t be caught dead wearing the same frock to different events. At least, not in the same year. All this caused me quite a bit of frock sticker shock because I was spending a pretty penny on all those dresses. Then I learned a secret from one of the news anchors I’ve never forgotten. She told me, “Just because I make good money don’t mean I have to spend it all.” She shared her mantra with me after I’d complimented her on a gorgeous maxi dress she was wearing, and she’d revealed she’d bought it for $26 at a local Charlotte Russe store!

This was before High Low-End shopping was a thing. But now that it IS a thing, it’s easier than ever before to look like a Diva without spending like one.

I can talk about Neiman’s and Saks every day, all day. I love a good designer, especially those who have done their job with fabric and fit to ensure their clothes look good on someone curvy like me. But my frugal friend who heads up a news station in New York makes a game out of finding the same pieces after they’ve gone on sale at TJMaxx, Marshalls, or Century 21. She hasn’t ever met a city whose premier outlet mall she hasn’t liked, and she turned me on to Fox’s which sells off-price designer wear for waaaay less. For that, I’ll forever be indebted to her.

I’ve learned that I can also get a nice name-brand item in other places where the dangled price tag isn’t a car note: trunk sales, consignment shops, and shopping off-season. You can also try ordering online because sometimes there are direct-buy discounts and sales. You’ll have to do some planning and sort of change your mindset from “I want this NOW” to “I can get this then” and still be happy.

My favorite online go-to shop for inexpensive pieces that don’t look inexpensive, is ASOS. At ESSENCE Magazine’s 2015 Upfront, I spoke with confidence wearing a $40 dress. On another occasion, I added emerald green fur wrist cuffs to it and wore it while giving a speech at a Rainbow PUSH breakfast. Who can’t afford to look good for what amounts to twenty bucks a pop? Add a pair of designer shoes with feathers and a fierce purse, and no one need be the wiser. (Except when people ask me, “Girl, that dress is everything! Where did you get it?” I tell them). 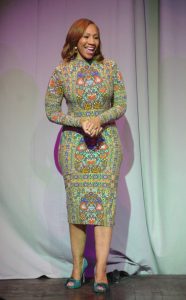 Nothing can up your fabulosity game faster than a fierce handbag, and when it comes to handbags, the price tags can be staggering. But if the coos and “Ooh, where did you get THAT?!” are the same, do you need to spend the equivalent of a house note on a fierce bag? 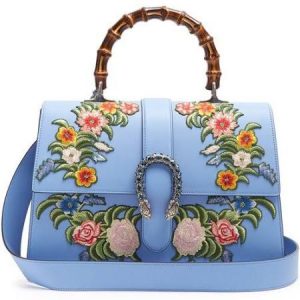 This beautiful Gucci bag will set you back about $3,800—not that I’m adverse to paying that much for a bag. 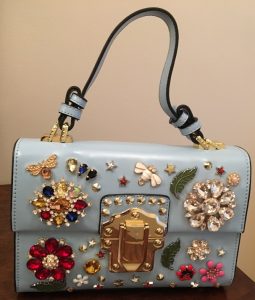 But when I can get the same reaction for this $98 bag purchased from Fox’s, why bother?

I’ve said it before. I’m a Louis Vuitton girl, but during a trip to Dubai, I found nirvana at one of those “black market” shops where I purchased a $200 fraternal twin-sister bag for the $4,000 one I’d purchased in Paris. Can you tell which is which? 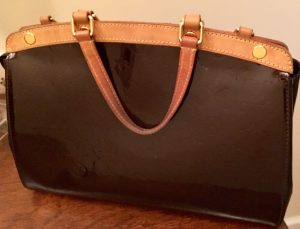 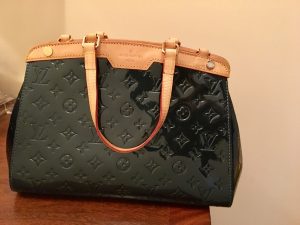 (The top bag is the real McCoy.)

Doing the high-end/low-end look stretches your fabulosity factor because you’ll rarely be seen wearing the same thing twice, and you can afford NOT to. Because you’re a BOSS to begin with, people rarely suspect you’re not toting an original bag, or stepping out in to-die-for designer stilettos or smocks. Now, when there is the chance to go high end and you think you’re going to regret it if you leave something hanging in the store instead of in your closet, by all means, buy it! I’m still praying that at some point I’ll be reunited with that coral Roland Mouret sheath I walked away from in Neiman’s two months ago. Pray with me, ya’ll.